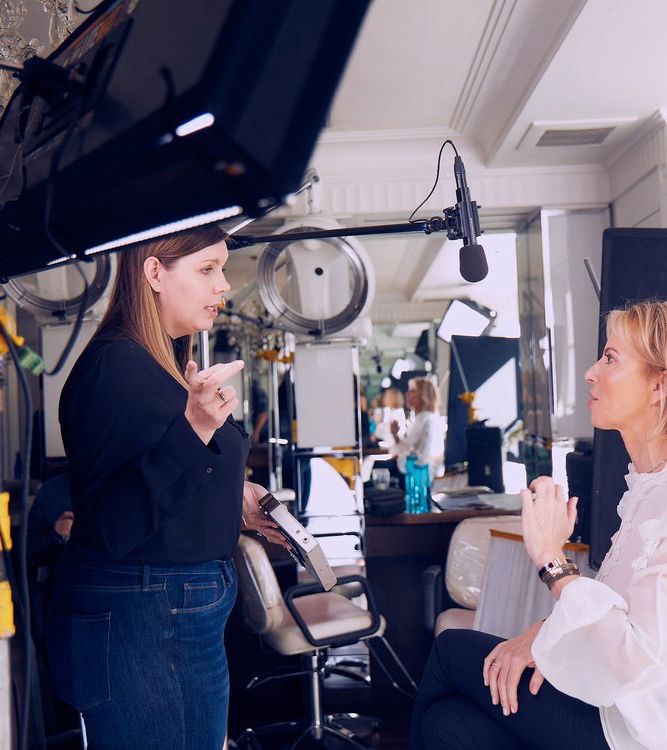 4/19/2021
By the time Amy Keller Webber '97 was standing on a red carpet receiving career advice from actor Harrison Ford, she had already earned degrees from George Mason University and University of Durham, lived in Europe, moved to Los Angeles, and made a name for herself in the international press world with bylines in Vogue, Marie Claire, Cosmopolitan, Self, and a monthly article in the Japanese issue of GQ - all within a decade of graduating from Chatham Hall.
“He said that he moved out to Los Angeles with about twelve friends from the midwest and slowly, one by one, they moved back home but he never did,” Webber remembers. “He refused to give up on his dreams. Even when he was crashing on a friend’s couch, eating beans from a can because that’s all he could afford, or taking odd jobs as a carpenter on sets just to be near movie making because that was his dream. He said eventually you succeed because if nothing else, you’re the last man standing!”

For Webber, a similar tenacity led from a journalism career to production with Hallmark Channel and nomination for multiple Daytime Emmys, followed by taking a risk on then-fledgling digital video with PopSugar and E! Entertainment, and eventually founding and owning her own digital production and consulting company, Paideia Media.

“You grow so much when you truly go all in on your dreams and keep working on achieving those dreams and goals that seem impossible,” she says. “I have been really lucky to get to find a way to ideate, create, produce, and direct digital video content while collaborating with brands, celebrities, and causes I love. At Paideia Media I have been able to work with internationally known brands, seen my work broadcast on television, in stores all over the world like Sephora, and been able to be a part of projects that speak to causes I believe in, like a recent special I did with Michelle Obama and the Girls Opportunity Alliance, Girl Talk: Knowledge Is Our Superpower, which was simulcast across the Discovery family of networks as well as digital platforms ranging from TikTok to YouTube.”
Even the COVID-19 pandemic could not slow down Webber’s dreams. While it put a temporary halt on traditional production elements, Webber pivoted to focus on innovative ways of bringing creative visions to life and the Paideia Media Business Solutions Kit was born. As an online, subscription-based course, the Kit breaks down how to create successful, intentional, digital videos to connect brands with consumers in clear and meaningful ways.
For Webber, her years at Chatham Hall are the foundation that taught her time management, critical thinking, and listening – all skills she uses daily at Paideia Media.
“I learned to listen to a lot of different opinions with curiosity and empathy and come to my own conclusions. I learned to really try and hear what the other person was saying and where they were coming from and why they felt the way that they did. I learned that there is room for all of us, all of our opinions, experiences, and all of the different ways we interpret the world around us and those differences are what make life rich, vibrant, and exciting,” she said.
Back

A girls' boarding and day school in southern Virginia, Chatham Hall prepares girls for college and for productive lives. Our innovative academic program offers advanced courses, global study and travel, as well as project-based learning. We foster the intellect and character of each student and, through our Honor Code, live in a community of trust. Grounded in its Episcopal heritage, the school welcomes students of all faiths and backgrounds.
800 Chatham Hall Circle | Chatham, VA 24531 | 434.432.2941 | admission@chathamhall.org